Building Better Boys is designed to see marked results of improved behavior and social skills, so teachers can teach and students can learn.

Purpose: To educate, inform, and build self-worth in the youth of our community. To inspire students to conquer their fears and live their dreams. 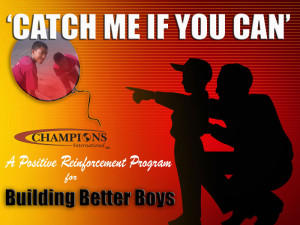 “Why? Because we as parents are raising the next generation of men who will either lead with honor and integrity or abandon every good thing they have inherited. They are the bridges to the future. Nations that are populated largely by immature, immoral, weak-willed, cowardly, and self-indulgent men cannot and will not long endure. These types of men include those who sire and abandon their children; who cheat on their wives; who lie, steal, and covet; who hate their countrymen; and who serve no god but money. That is the direction culture is taking today’s boys. We must make the necessary investment to counter these influences and to build within our boys lasting qualities of character, self-discipline, respect for authority, commitment to the truth, a belief in the work ethic, and an unshakable love for God.”

Boys often begin to fall behind girls in reading, and writing achievement in elementary school, and boys often show signs of behavioral problems early in life.  Poor academic achievement is related to higher rates of school dropout and juvenile delinquency.

In 2004, 12% of males ages 16 to 24 were high school dropouts, compared with 9% of females.  Although males comprise one-half of the population, they make up 57% of the dropouts in this age group.

In 2003, 71% of all juveniles arrested ages 17 and under (2.2 million) were boys, and boys represented 85% of juvenile offenders in residential placement.